Read It and Weep

This review of my recent show at Gallery NAGA
is from the new issue of ARTnews. 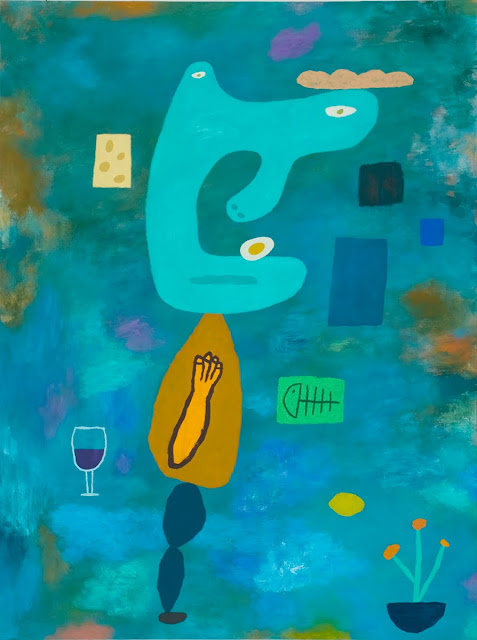 
Boston
There's an undertone of anxiety in Todd McKie's gleeful surfaces, but it's very hard to hear. An alchemist of color and form who transforms fragments of mundane existence into vivid, playful paintings, McKie amuses far more than he alarms. In one work, his protagonist is a tipsy reveler--a stick and balloon figure splendidly rendered in opaque pigments. In another vaguely unsettling scene, a farmer poised amid too much corn appears to be on the verge of freaking out.

Basketville (2009) features a man with an egg-shaped head and body, who stands at the center of half a dozen baskets in unruly orbits. In There's no Place Like Home (2009), a man bends from the waist to smell a potted flower, while a dark lamp hangs menacingly above him from a chain. Something seems just on the verge of going wrong.

In Pity Party (I'll Bring the Snacks), 2010, a distorted cartoonish head is surrounded by emblems of potluck foods and hollow gifts - a fish skeleton, a non-descript block of cheese floating in mid-air, a generic houseplant. Using a palette recalling Matisse and glyphs that seem lifted from Klee, McKie keeps the focus on everyday indignities.

The show also featured "Hair Today, Gone Tomorrow" (2010), an entertaining series on male baldness that McKie realized with photographer David Caras. In a lighthearted exercise in computer-aided grafitti, McKie uses his impish digital brusk to paint faces on black-and-white images of the backs of bald men's heads. It's an impressive and economic use of line. The illusion is first-rate, as is the humor.